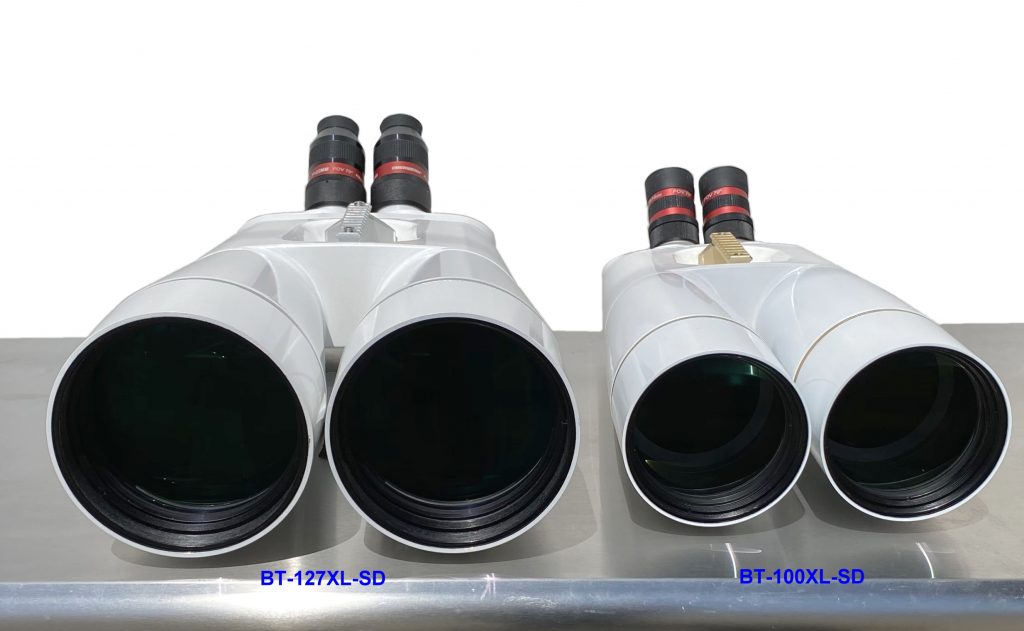 Since the announcement of the BT-127XL-SD, we’ve been surprised by the large number of pre-orders we’ve received, even before any customer reviews have come in. While we do sincerely believe it’s the finest binocular telescope that money can buy, at least that one person can easily manage, it may not be the best binocular for you. The BT-127XL-SD was intended for the serious amateur astronomer. When used under very dark skies, it excels at bringing out detail in the faintest nebula and galaxies. But we’ve noticed that some are buying it simply because it’s our most expensive model, apparently assuming “most expensive” means “best”. For those that are mostly interested in watching whales from their oceanfront home, or those that mostly want to view Saturn and Jupiter from their somewhat light-polluted skies, the BT-100XL-ED could be the better choice. The only real difference between the 100XL and 127XL, when used for daylight viewing, as well as viewing brighter night-sky objects, is the 127XL is operating at 93x with our optional 7mm eyepieces, while the 100XL is operating at 80x with the same eyepieces. This is not a noticeable difference, and therefore the much higher weight, size, and cost of the 127XL may not be worthwhile. Besides cost, the much heavier 127XL has some other disadvantages. The carbon-fiber elevator that we normally equip with the TR3 hardwood tripod, which allows up to 18″ of instant height adjustment, can’t be used with the 127XL. The only way to have an elevator with the 127XL is to opt for the much more expensive (and not as pretty) Manfrotto 161MK2B tripod. The 127XL, in its huge trunk-style wheeled case, weighs 54 lbs., while the 100XL, in its much smaller case, weighs 25 lbs.- something to be aware of if you intend to transport your binocular.
If it sounds like we’re trying to talk customers out of buying our $5400 binocular, that’s not the intent- we’d be happy to sell them as fast as we can build them. We just want to make sure that you end up with the binocular that makes the most sense for your intended usage- and for most, that’s very likely something smaller than the 127XL.