Your catalog lists the specifications for both these binos with the same (FOV of 6.0)
How is that possible? I own the 11×56 LW but was thinking I’d like a wider FOV.
What is the FOV on the 8×56 and 11×56? If you could convert that to feet of view also it would be helpful for me but it’s OK if not. 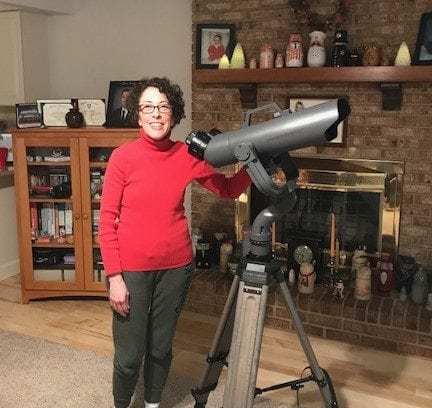 Congratulations to Donna T. of New Jersey, winner of the Oberwerk BT-100-45 Giveaway Contest! Donna’s name was randomly drawn by our advertising agency from a list of contest entries collected from early December through Jan. 31st. Donna won a one-of-a-kind prototype “Big Eyes” Gray BT-100-45 binocular telescope and fork mount, as well as a one-of-a-kind Slate Gray Maple TR3 hardwood tripod. The production “Big Eyes” Gray is a shade lighter than the prototype, while Slate Gray finish is only available on the poplar tripod (not maple). We wish Donna and her husband Steve many enjoyable nights of stargazing with their great new astro-gear!