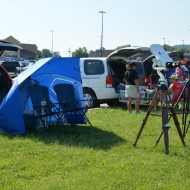 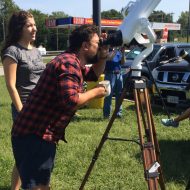 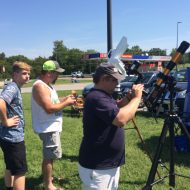 Trying to grab a photo off the hydrogen-alpha scope 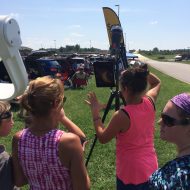 Wowed by the iPad view 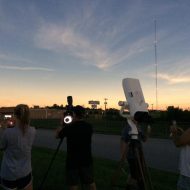 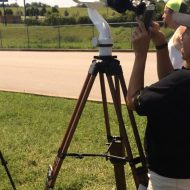 iPhone captures images from the BT-100-45 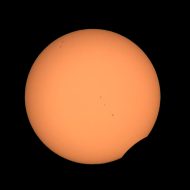 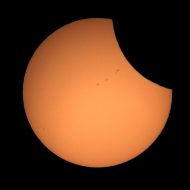 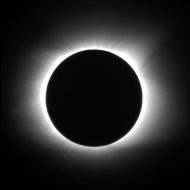 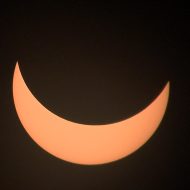 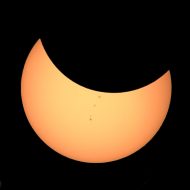 While Dayton, Ohio would see 89% coverage of the sun during the Great American Eclipse, the crew from Oberwerk headed south in order to experience totality.  Linda and Rick were near Gatlinburg, TN, while Kevin and Jane headed for western Kentucky.  Hopkinsville, KY was declared the best place in the Midwest to observe the eclipse, but we elected to avoid the crowds and chose Russellville- about 30 miles to the east, and also on the center line (2 minutes 29 seconds of totality).  In order to avoid crazy-high hotel rates, we stayed in Louisville, KY on Sunday- which was far enough from the band of totality to still have normal-price rooms available (not to mention downtown Louisville’s 4th Street Live is always a great time).

Our plan was to arrive in Russellville early Monday morning and then scope out the town for the best place to observe.   But first we had to stop at the Russellville Walmart Supercenter to purchase chairs, since we had forgotten to load them in Dayton.   Upon exiting the Walmart (8am), we noticed that the perimeter of the huge parking lot was lined with cars, and some people were setting up telescopes in the lawn area surrounding the parking lot.  We immediately realized that we had found our spot- so we grabbed one of the last available perimeter parking spots and set up.

We brought an Oberwerk BT-100-45 for visual observation (prototype high-gloss white with Oberwerk-USA  TR3 walnut tripod), and an Oberwerk 20-60×82 Sport ED Spotting Scope with Novagrade Tablet Adapter, to capture images and video on an iPad Pro.  Both were equipped with Thousand Oaks solar filters.  We also brought our Coronado PST, with Denkmeier 60mm upgrade, for hydrogen-alpha views of the sun while waiting for the eclipse to begin.  It was a hot day, but the skies couldn’t have been more perfect.   While waiting, we had dozens of people stop by checking out our gear, and it was great fun watching people gasp when they saw the BT-100-45’s incredible view of the eclipsing sun!  The iPad, Novagrade-mounted to the Sport ED spotting scope, was also very popular, as groups of people could all see the view from the 10″ screen.  We estimate there were between 200 and 300 people hanging out at the Walmart parking lot, everyone we met was very friendly and excited to be there.

When totality arrived, the crowd cheered- and it was truly awesome!   We were concerned that the Walmart floodlights would turn on, but they remained off, even though most streetlights off in the distance were on (Thanks Walmart management!).  When the eclipse ended, we packed up and headed for home- us, and millions of others.  Needless to say, the return trip was miserably-slow (we arrived at 12:30am).  But we all agree- it was certainly worth it!

One Reply to “The 2017 Great American Eclipse”