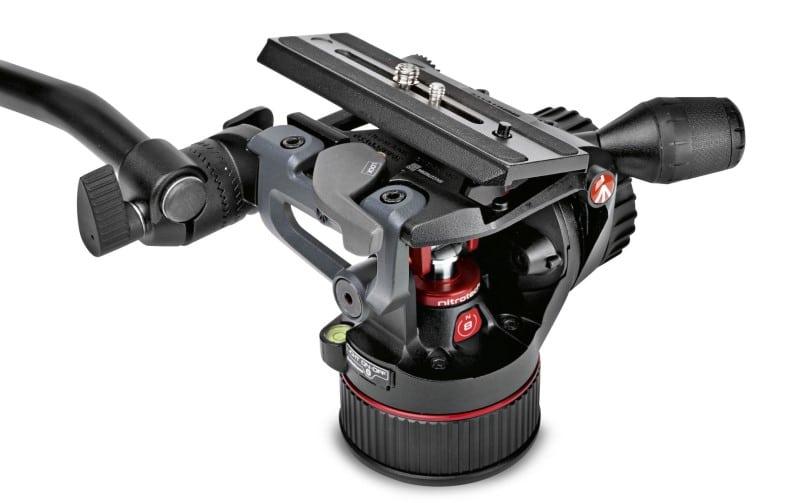 Manfrotto recently introduced two new revolutionary tripod heads- the Nitrotech N8 and N12. They are indentical in appearance and size, however the N8 ($450) is rated for up to 17.6 lbs., and the N12 ($600) is rated for up to 26.5 lbs.
What makes the Nitrotech revolutionary is they have a “Variable Continuous Counterbalance System”. They’re not the first heads on the market with this feature, but they’re by far the most-affordable- especially so considering their relatively-high payload capacities. What is “continuous counterbalance”? Higher-quality video heads, such as the Oberwerk 5000, use counterbalance springs to compensate for off-balance loads, however they typically are not adjustable. So while these counterbalance springs do reduce the amount of friction required to hold a binocular at any tilt angle, considerable friction is still required to prevent the head from drifting.
The Nitrotech, utilizing a nitrogen-charged piston to variably-counterbalance the load on the head as it moves off-axis (tilts forward or backward), allows for precise counterbalance adjustment, requiring only a minimal amount of friction to prevent the head from drifting, regardless of the amount of tilt.
We tested the N8 and N12 with our new XL Series Binocular Telescopes, and found that the N8’s counterbalance actually works a little better than the N12 for the weight range of our BT-82XL and BT-100XL binoculars. With the relatively-light load of the magnesium-alloy XL binoculars, the counterbalance on the N12 needs to be set near its lower limit, which makes makes dialing in counterbalance and friction, and minimizing backlash, a little “fussier” than the N8, which is operating in the mid-range of its counterbalance setting with these binoculars. For this reason, we’ve decided to offer the lower-cost N8 as an option for the Oberwerk TR3 hardwood tripod for the XL Series. It’s still a substantial $330 upgrade over the very-capable Oberwerk 5000 head- but once you’ve experienced the ability to maneuver your binocular to any position with one finger- and have it hold position when you let go- you might feel that it’s money well-spent. Besides that, like the XL binoculars, the Nitrotech has an attractive hi-tech look- and the red-anodized accents nicely-match the red-anodized trim on the XL-ED models. 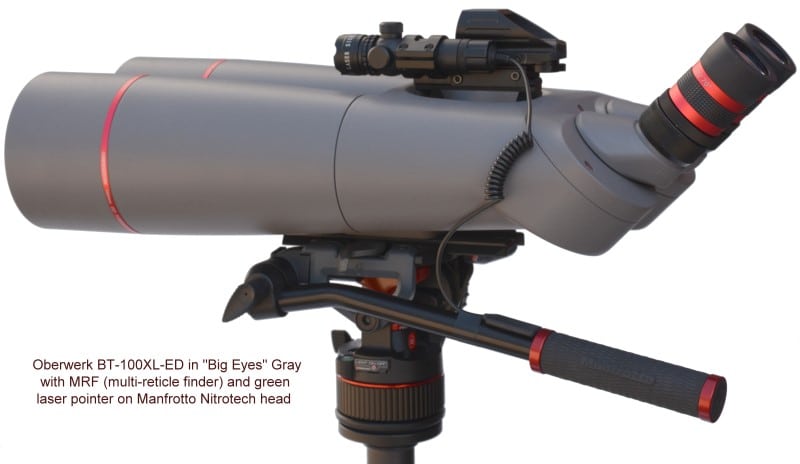