Just Say No to Zoom Binoculars

Zoom synchronization
Many of us have high-quality zoom lenses for our cameras, and they work very well. Why not take advantage of the same technology with our binoculars? The primary problem with using zoom lenses in binoculars is due to the fact that a binocular is two independent telescopes connected by a hinge.

Zoom binoculars therefore must somehow maintain synchronization of the zoom mechanism (which consists of moving lens elements with each eyepiece), between both telescopes. This is accomplished by the use of a flexible metal band that passes through the ocular arms, connecting the zoom mechanism on the right side, to the zoom mechanism on the left side. Each moving part of the system has a certain amount of backlash, or “slop”, that is unavoidable. Because there are a number of parts of the zoom mechanism, each adding a small amount of “slop” to the system, it is impossible to maintain perfect synchronization. Each of the two telescopes will always be leading or lagging the other, depending on which direction the zoom lever is moving. The result is two telescopes that are never exactly at the same magnification.

Collimation problems
Because zoom binoculars use moving lens elements in each eyepiece, each image will shift slightly in some direction as the lens elements move. This would not be noticeable with just one eyepiece, but because a binocular uses both eyes, collimation (the alignment between the two telescopes to each other) changes slightly (sometimes more than slightly) as the zoom lever moves from one end of the magnification range to the other. The image shift typically moves the opposite way as the direction of the zoom lever changes. The result is a binocular that is never in “perfect” alignment. As magnification increases, good alignment becomes increasingly important. Compounding this problem is the magnification synchronization problem mentioned previously. 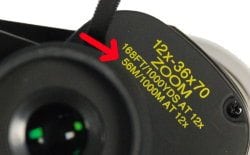 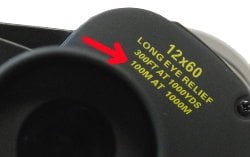 Marketing hype
Manufactures push the magnification levels of their zoom binoculars to unrealistic levels in an effort to make their product appear to be the most “powerful”, therefore “the best”. Some zoom binoculars zoom to impossibly-high magnifications- some even over 100x! Not only will the image quality be very much degraded at these levels, good alignment is hopeless. In general, a zoom binocular that has upper magnification greater than half of the objective diameter in millimeters (eg. the “60” in 10-30×60), is more of a novelty (toy) than a usable optical instrument. Some manufactures label these “military binoculars”, which is deceptive marketing hype. Here’s an example of a 20-140×70 “Military Zoom Binocular”. No military would ever use zoom binoculars, let alone models that zoom to such ridiculous magnifications. The hype doesn’t stop there- this importer also claims that “only one factory possesses the technology to manufacture binoculars that can zoom up to 140 times closer!” This is probably the same factory that possesses the technology to double your gas mileage and horsepower by clipping a magic device to your fuel line. Not only that, “70 times more light comes into its gigantic 70mm lens”!  These hucksters are clueless… 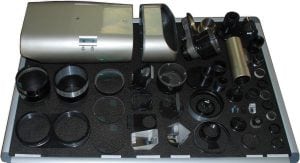 There’s a reason a binocular capable of 75x magnification weighs 28 pounds. The picture (at right) of a disassembled Oberwerk BT-100-45 shows what it takes to build a binocular that is truly capable of extreme magnification, with the combination of image clarity and precise alignment required to provide high-quality viewing.  The BT-100-45 contains 7 lbs. of optical glass, and for good reason. Good image quality at extreme magnification is simply not possible with an inexpensive light-weight zoom binocular.