You’ve seen the coin-operated binoculars at top of skyscrapers and at the great vistas in our national parks. You might think it would be nice to have something like that on the back deck- a binocular that can be left outdoors in any weather. Well, it is possible to buy a binocular like that, however some companies only lease them. Unfortunately, Oberwerk doesn’t offer a permanently-mounted weatherproof binocular. Oberwerk’s XL Series Binoculars Telescopes are the most powerful binoculars in the world. But these precision instruments, while quite well-sealed from the elements, are not weatherproof. A light rain, or freezing temperatures, generally won’t be a problem- but repeated freeze/thaw cycles, or heavy rain, can cause a build-up of internal moisture. This moisture may condense on the lens elements, causing the binocular to “fog up”. The fogging will eventually dissipate, but it can leave deposits on the glass lenses, which can permanently degrade image quality. So the Oberwerk binocular telescopes can be moved outdoors on a nice day, but the rest of the time, it’s best to keep it indoors in front a large window looking out over your view. 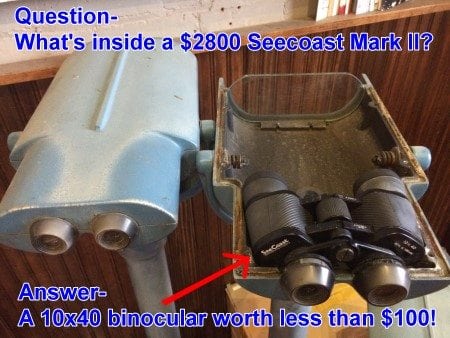 Let’s take a closer look at the weatherproof binocular. First of all, note that the binocular itself doesn’t have any moving parts (other than the coin mechanism). There is no way to adjust IPD (inter-pupil distance). So unless your eye spacing matches the spacing of the eyepieces on the weatherproof binocular, you’ll probably be looking through it with one eye (like a telescope). There is also no way to focus the binocular. They call this “perma-focus” or “automatic focus” (nothing automatic about it, it is simply non-adjustable). Focus is simply pre-set to 1 or 2 miles out. Forget about a clear view of anything closer or farther than that. The height is also non-adjustable. The real surprise with these giant weatherproof binoculars is that the large housing is just a weatherproof box containing a coin mechanism, a shutter, and a surprisingly-small binocular. They have very low magnification (8x to 10x) and very small objective lenses- typically only 40mm or 50mm! So these big weatherproof binoculars offer no more light-gathering and magnification than the average 2.5 lb. hand-held binocular! The primary purpose of these is to generate revenue, and protect that revenue (vandal-proof), and survive harsh weather conditions- which they do very well. But if you’re looking for a high-quality optical instrument that will provide the best-possible view- forget about these.
So instead of spending almost $4000 for a permanently-mounted weatherproof binocular, buy an Oberwerk 10×50 Deluxe for $179.95. Simply carry it outside in any weather- and you’ll have a binocular that far-exceeds the optical performance of that expensive permanently-mounted binocular. You’ll also be able to match the IPD to your own eyes, achieve perfect focus on anything near or far, and take it with you anywhere you go. Best of all, you’ll still have enough money left over to purchase one (maybe two!) of the world’s most powerful binoculars.