Several customers have asked about using the latest generation (Mark IV) of Baader Hyperion 24mm-8mm zoom eyepieces in our BT-70-45 and BT-100-45 binocular telescopes. So we purchased a pair (best price we found online is $289.95 each) to see if they are a worthwhile alternative to multiple pairs of eyepieces in various focal lengths. The short answer is- maybe. 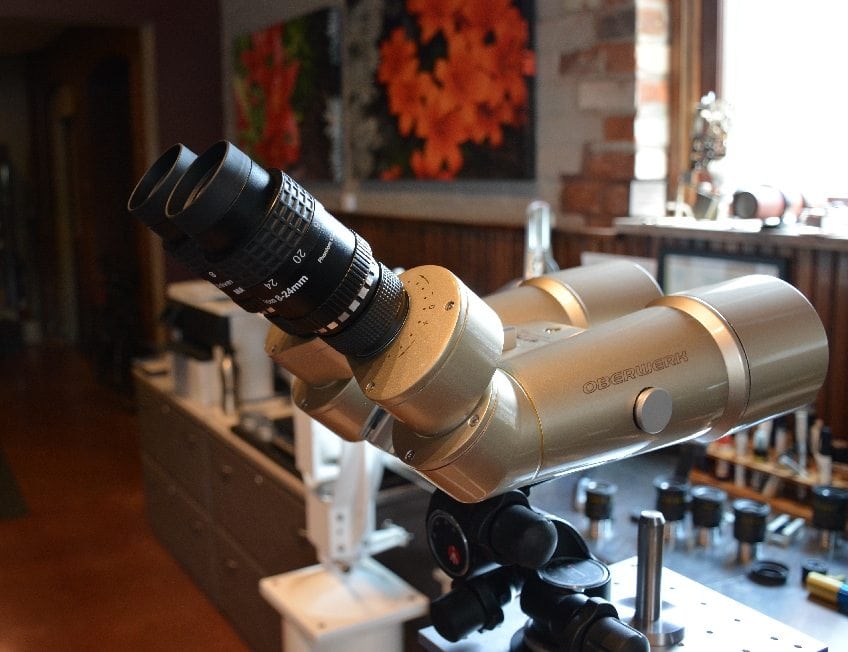 The Good-
This eyepiece zooms from 24mm to 8mm, with 3 stops in-between (20mm, 16mm, 12mm)- so perfectly matches the recommended range of both the BT-70-45 (16x to 48x) and BT-100-45 (25x to 75x). Theoretically, this one eyepiece can replace 5 fixed-focal-length eyepieces. It is supplied with a 1.25″ barrel, a 2″ barrel, a spotting scope adapter, a twist-up eyecup, a fold-down eyecup, and even a well-made and attractive carrying case. For binocular telescope usage, of course we’re going to use the 1.25″ barrel. Fortunately the barrel does not have the annoying and problematic undercuts found on so many other modern eyepieces. The barrel instead uses lightly-cut grooves intended to prevent slipping out of a focuser when pointed upward. These grooves are no problem for the BT-70-45 focusers, but may cause extra insertion difficulty for the O-rings used in the BT-100-45 focusers.
The workmanship is outstanding, and the eyepieces have a very high-quality look and feel. Eyepiece eccentricity (lens element centering) is perfect with our pair- in other words, alignment does not change the slightest when the eyepiece is rotated.
The Baader eyepiece is quite large, but not large enough to limit IPD when two are used side-by-side. The eyepiece comes with a nice twist-up eyecup, however these twist-up eyecups will be too wide for most people- there’s little room for your nose in-between. Fortunately Baader supplies a much narrower rubber fold-down eyecup that can be easily swapped for the twist-up, and these rubber eyecups should work well for just about everyone. 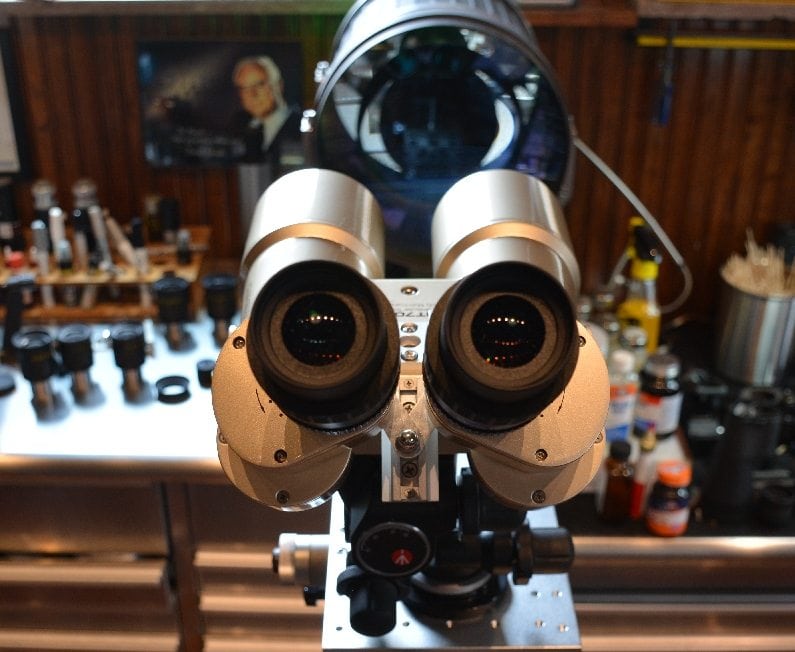 The Not-So-Good
As with any zoom eyepiece, AFOV (Apparent Field of View) changes with magnification. AFOV is just 50 degrees at 24mm, but is a wide 70 degrees at 8mm. This is unfortunate as we use low magnification to obtain a widest-possible FOV. When used in the BT-70-45, 24mm (16x) provides only a 3-degree TFOV (true field of view). In comparison, the Oberwerk 16x eyepieces give a 4-degree TFOV. This is the biggest downside to using the Baader zoom eyepieces. But as magnifications go up, so does AFOV, so narrow AFOV is less of an issue at the other magnifications, and is as wide as most fixed-power eyepieces at the highest 8mm setting.
There is a click-stop ring used to select one of five magnifications. Unfortunately those click stops are very weak in feel, and make a barely-audible click- so it can be a somewhat difficult to find the three middle stops.
Surprisingly, the click-stops are not parfocal- which means that as magnification is changed, a slight change in focus is necessary. It’s just a small amount between each stop, but significant when jumping between the extremes.
The Baader zoom eyepieces require more back-focus than Oberwerk eyepieces, so focusing at infinity will be very close to the focuser’s inward limit. If you plan on buying a new BT-70-45 or BT-100-45 with the intention of running the Baader zooms, let us know and we’ll move the focus range to give the Baader’s a little more focus beyond infinity. This modification will sacrifice just a small amount of close-focus distance when using the Oberwerk eyepieces.
UPDATE: The Baader Hyperion Zooms are not compatible with Oberwerk XL Series Binocular telescopes. Not enough back-focus available to make these come to focus at infinity. 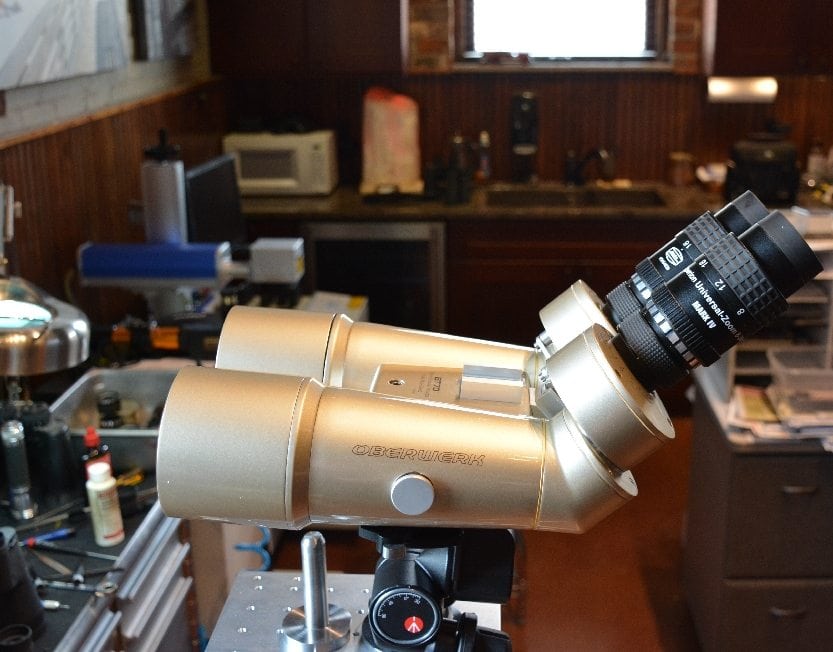 Conclusion-
So- are the Baader zoom eyepieces worth the $600 expense? If you are content with the stock 24mm eyepieces and perhaps one other 12mm or 8mm pair, probably not. These two pairs will give nice wide AFOV views for just $180 extra- the only downside is you have to swap out the eyepieces to make the change. On the other hand, if you’d like to have more than 2 magnifications, the Baader zoom eyepieces are definitely worth consideration. While more expensive than purchasing all 3 optional Oberwerk eyepiece pairs ($540), the convenience of quickly switching between 5 different magnifications without having to swap eyepieces may very well be worth the cost. The biggest downside is the lowest magnification has a disappointingly-narrow FOV. But you’d still have your stock eyepieces to swap to if you needed the widest-possible FOV.