Most binoculars have a descriptive model name, such as “10×50 Deluxe” or “20×80 LW“, the first number is the magnification, the second is objective diameter in millimeters. But a binocular telescope, such as “BT-100XL-ED“, only declares objective size because magnification is entirely determined by the focal length of whatever eyepieces are plugged into it. For the BT-100XL-ED, an eyepiece focal length of 22mm=25x, 14mm=40x and 7mm=80x. 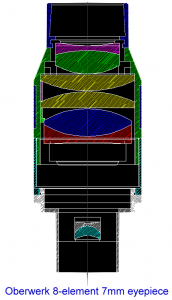 So the primary function of the eyepiece is magnification of the concentrated light that is gathered by the objective lenses and image-corrected by the prisms. But there are a number of other eyepiece attributes and qualities that greatly influence all aspects of the image seen by the person viewing through the binocular. These include AFOV (apparent field of view), the degree of sharpness across the entire field of view, contrast, and eye relief. The human eye has a FOV of roughly 120 degrees (out of a 360-degree circle), and with two eyes we can see roughy 180 degrees horizontally. Eyepiece AFOV is measured the same way as the human eye, and the wider the eyepiece AFOV, the more immersive the viewing experience. Eyepieces that have a narrow AFOV (50 degrees or less) give a feeling of “tunnel vision”, while a wide AFOV is more of a “picture window” feeling.

But wider AFOV’s can be problematic, especially with maintaining sharpness as you approach the edge of the field. The goal with eyepiece design is to obtain as wide of an AFOV as possible, yet maintaining sharp focus across the entire field of view, preserving high contrast (“blacker” blacks), and hopefully having enough eye relief that you can comfortably see the entire FOV without having to get your eyes right up against the lenses, even better if those wearing glasses can see the entire FOV.

In recent years, eyepieces have improved radically, with increasingly-complex designs using more (and often much larger) lens elements to achieve those goals. All three of Oberwerk’s new XL eyepieces have a wide and immersive 70 degree AFOV, with incredible sharpness across the entire FOV. Contrast is excellent- and there’s enough eye relief to use while wearing glasses. Take a look at the cutaway on the right showing the eight lenses used in these eyepieces. Compare that to the 25x and 40x (3 or 4 element) eyepieces included at no extra charge with a competitor’s binocular (shown at the upper left). Which do you think offers the highest-quality view? All this improvement in eyepiece performance comes at a higher price of course, but eyepieces are a critically-important component of any binocular telescope. Compare the cost of Oberwerk XL eyepieces to the highly-regarded telescope eyepieces from Baader and Teleview shown at the upper right (which by the way also work nicely the the XL Series) and you can see that Oberwerk eyepieces are very competitively-priced. While the XL Series binocular telescopes offer unbeatable performance and value, it’s the XL eyepieces that are the “secret sauce”.