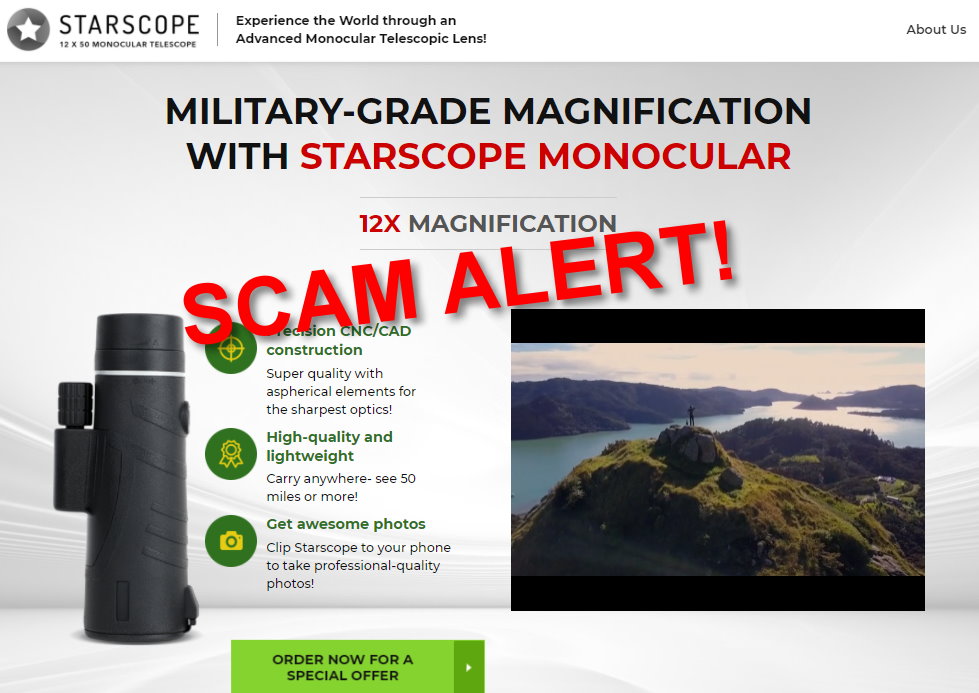 The StarScope Monocular is yet another product scam that apparently lots of people are falling for. This one isn’t quite as egregious as the “10-300x40mm Super Telephoto Telescope” we warned you about previously, but it’s still full of deception. Despite the ridiculous claims of military-grade magnification, better than $3000 Telescopes! and …will give you the power of a $4000 DSLR in your pocket, it’s just an ordinary low-end Chinese-made monocular. Note that it’s claimed to be 12x50mm, but the exterior diameter is 53mm, and with the thickness of the objective cell, body, and rubber covering, the objective lens itself could be no more than 42mm. The exit pupil diameter is listed at 3mm, which if correct means it’s actually 12x36mm.
They’ve even created a number of fake review websites, such as “Best Honest Reviews“, which asks the question StarScope: The REAL DEAL Or Just Another SCAM?, but sadly, concludes with the wrong answer.
Here’s another website called “Top Reviews Daily“, with a fake reviewer named Douglas Jones. Douglas is a gadget lover. He has two sons aged 7 and 16. Douglas loves good wine and stand-up comedy. 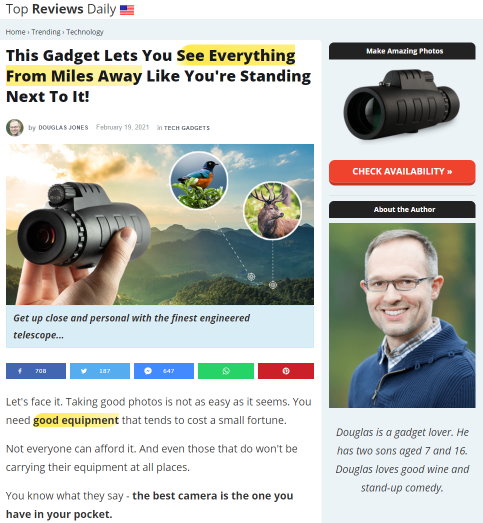 Gotta admit, Douglas is pretty funny! I bet you’re LOL right now too- unless you already ordered one of these? If you did, once you receive it and realize that you’ve been scammed, you’ll want to return it for a refund. Then you’ll discover that they’re not based in the USA- you have to return it to China- and the least-expensive shipping method will cost more than the Starscope! If you try to contest this with Paypal, as well as most credit card companies, they’ll side with the seller- and say that you must return it in order to get a refund. So unfortunately, you’re stuck with it.

Conclusion: The price for the StarScope “special offer if you buy now” is around $50. While this is pretty high for the low-end Chinese 12×36 monocular that it is, it’s not a complete rip-off. While the claims for the StarScope are ridiculous, it should function as well as, but no better than, the sub-$50 monoculars on Amazon. If you’d like to have an ultra-portable monocular, the Oberwerk Sport HD II Monocular is a much higher-quality product than the Starscope- but it still doesn’t do anything like what is shown in the faked Starscope ad. If you want something that can provide a high level of magnification, with excellent optical quality, the only way to get that is with a large tripod-mounted binocular telescope.